The bluebonnets are blooming and I finally got around to setting up the indoor garden.

Been busy with the new job this week.  Noticed some momentum on the #deleteFacebook movement.  Of course, selling your personal information has always been Facebook’s business model.  The larger problem is that people aren’t just using this information to sell you consumer products, but also using it to sell you political ideologies.  This seems to be happening to the exclusion other factual information.  I’m not interested, thank you, and hence this blog.  Also had my odometer turn lucky 7777, with a temperature of 70F.  Wish I was sitting in front of a slot machine for that one.  And a nice breakfast for the whole family this morning.

It occurred to me this morning that when I was a child, there were very similar protests against gun violence in the US.  Young people were being killed in large numbers by military assault style rifles and the youth of America took to the streets in large numbers to protest.  Of course, this was the 1960s, and the students being killed were soldiers in Vietnam.

Somehow the older generation at the time, the Greatest Generation, did not see this as a problem.  They had gone to war, or at least their peers did, and some of them died.  The younger generation saw the world differently.  They didn’t see a communist Vietnam as a threat to America.  It must be pointed out that the people in favor of the war in Vietnam largely weren’t the ones doing the fighting, and the ones opposed were largely the ones dying.  Very similar to today.

To pile the irony in deeper, today’s pro-gun crowd are the same generation that protested the war in Vietnam in their youth, with almost identical complaints.

Of course, the youth movement of the 1960s did not achieve its aims, at least in the short term.  Nixon was re-elected in a landslide and the war in Vietnam would not end until 1974.  It was largely believed that the children of the 1960s, even with their huge demographic advantage, abandoned politics after these defeats.  They would not go quietly, though, and it is hard to think of any part of the culture not dominated by the Baby Boomers of the intervening decades.  We all live in their world today.

Best of luck to the kids.  One thing is certain, they will win in the war of attrition.  May they build a better world than their parents did.

Yesterday we walked into the garage on the way out to dinner when there was a BANG!  I was certain someone was shooting at us.  My wife knew immediately what happened.  She was cleaning up the garage earlier in the day and dropped a couple of cans of beer on the floor. This one just blew out the normal push tab and made a mess of the counter.  We cleaned it up and went out to dinner.  Diane warned me that there was one more UXO in the garage, but we weren’t sure which beer can it was.  I figured it would settle down on its own.  It didn’t. This one must have gone off with a real bang.  Beer all over the floor.  Cars, walls, etc spared.

Saw a leaf sticking out from under the valve cover for my propane tank.  Pulled it out and more stuff came with it.  I noticed it wasn’t closed properly.  As I was cursing my propane (and propane accessory) man, I opened the cover and saw this.  I gently re-closed it, halfway, like it was before.  Probably not necessary but I will put a note on it for my propane man.  It is warming up so we might not need a fill until after the babies hatch. 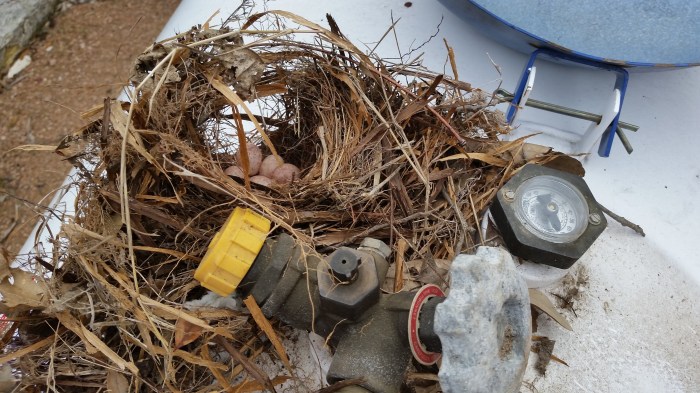 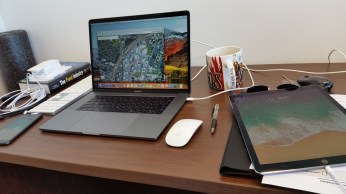 Why Are White Men Stockpiling Guns?

“Three percent of the population now owns half of the country’s firearms, says a recent, definitive study from the Injury Control Research Center at Harvard University.”