Watching the local news I was led to believe that the protests in Austin were peaceful.  This story in the Austin American Statesman tells a different story.

… Austin-Travis County Emergency Medical Services officials said Friday that at least 41 people were injured during the past several days of protests. Those injuries caused by less-lethal rounds include an open skull fracture with soft-tissue damage; a fracture to the lower jaw and soft tissue damage in the cheek; a severe hematoma between the brain and skull; and an open chest injury with broken ribs.

Had some really good leftover steak.  Decided to go simple and use regular packaged chicken flavored ramen.  Added an egg, soy, garlic, ginger and sesame oil.  Not much in the way of veggies, just sliced onion.  Only used half of the flavor packet from the ramen package.  A slice of spicy Monterey Jack cheese and some green onions on top and a bit of homemade sauerkraut.

A bit long and technical, but the upshot is that informed citizens, listening to experts, did the most to help control the spread of COVID-19.  Lockdowns often came too late and with too many loopholes and exceptions.  Asia may have also had an advantage due to other recent similar epidemics.  In the west this was all totally new.  Hope we do better next time.  From Naked Capitalism.

Why Did Covid-19 Spiral Out of Control?

: a collapse (as of a society or regime) marked by catastrophic violence and disorder broadly : DOWNFALL

As events in the rest of the world accelerate, events in my world seem to be slowing down.  I have three brush piles in the back yard that I am slowly cleaning up.  For a decade or two I piled up branches whenever I trimmed or cut down trees.  Decided to clean up my yard and the brush piles were my first target.  Bought a little electric chipper and have been slowly making progress.  Using the mulch from the chipper to mulch the front beds.  Today I decided to take on some larger branches I took down a few days ago.  The plan was to cut these into three foot pieces, as straight as possible, for the wood piles and later burning in the fire pit.

After getting my long extension cord out, my small electric chainsaw and putting on gloves and glasses I had made about three cuts when I smelled something.  We have skunks living around here and I believe they have made burrows under all of my brush piles.  They don’t bother me but I’m always a little nervous that one time when I’m pulling a branch off of the pile I’ll rouse a skunk.  So I looked around and saw this little guy.  No mom any place to be seen and he was behind my fully fenced in yard.  He could have come through the iron fence but no way any larger animal could.  I was sawing just a few feet from this guy and he didn’t move.  At first I thought he might be dead.  I couldn’t see any breathing and his eyes were open but he seemed alive.  I took a picture and  decided to call it a day.  Came back less than an hour later and he had moved on. 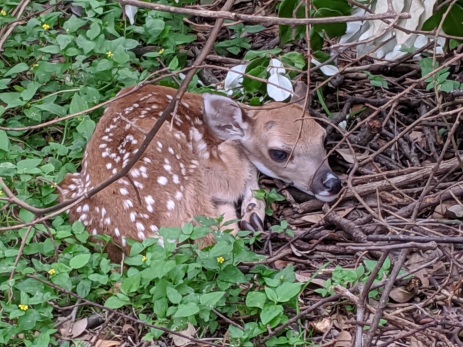 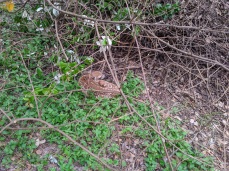 “Things refuse to be mismanaged for long.”