I was wondering if this was in the works.  A new Raspberry Pi 4 board with 8 GB of RAM.  I bought one of the 4 GB models, which is my new desktop machine.  In the old days I would have upgraded the RAM in my PC, with the Raspberry Pi I’ll just get a whole new board.  For $75, why not?  No real hurry.  4 GB seems to be more than enough right now.

The most powerful Raspberry Pi now has 8GB of RAM

A good overview of the COVID-19 crisis in the US from the BBC as a grim milestone of 100,000 deaths is surpassed.  It is difficult to view this as anything but a horrific failure, and it goes on. 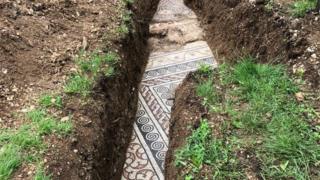 Funny the ancient Romans built stuff like this to last centuries, but my bathroom and swimming pool tiles look terrible after a few years and need to be replaced in a few decades, max.  So much for modern technology.

There is a pulley on my mower below the battery below the seat that drives the differential / transaxle.  It would be nice to keep this part but nicer to drive it directly from an electric motor rather than via the complicated arrangement of belts and pulleys that go all the way to the 14 HP gas engine in the front.

This differential is just forward / neutral / reverse and had no gear shifting; that is all done by the belts in an unusual arrangement using “variable pulleys”. The biggest problem was finding out the gearing ratio of the transaxle.  Was going to put it up on blocks, (somehow) get it running and (somehow) count the revolutions of the wheels and the main pulley.  Maybe use a video camera.  This all seemed complicated and even dangerous, so I had another look at doing this without the motor running, and without dismantling the whole rear end.

Turns out I could prop one of the pulleys that maintained tension on the belt with a piece of pipe I cut, then putting the mower in drive and then turning the pulley it would inch forward.  Pieces of tape on the pulley and the tire let me keep track of the number of revolutions.  Turns out spinning the input pulley to the transaxle 21 times turns the 17.5 inch tires once.  This comes out to a little  over two inches (2.618) of forward progress of the mower for each spin of the transaxle input.

For 3,600 R.P.M. (for instance) times 60 gives 216,000 R.P.H (revolutions per hour). At 2.618 inches per revolution, we would go over half a million inches in that hour (565,488 to be more precise).  There are 5,280 x 12 inches in a mile. which gives 8.925 M.P.H.   which is pretty reasonable.   So I can directly hook an electric motor directly to this transaxle and get a reasonable speed.  I like this idea because it eliminates all the belts and pulleys, but keeping the transaxle keeps things like the brakes and the back wheel arrangement the same.

While researching this I learned that people race riding mowers.  Might be a new hobby in my future.

I still keep up with a few technical journals.  I tend to read CACM’s “Kode Vicious” letters.  Often a bit on the technical side, but written from a realistic, if not cynical, perspective.

The latest one is on self-driving cars.  Short and uncomplicated, it lays out some of the high level issues for success in safety critical software applications.  Not as boring as it sounds, even for non-techies.

Briefly, the battle against COVID-19 was cast as a “war”.  I thought this was appropriate.  Over 100,000 fellow citizens have perished and the economy is in tatters. If COVID-19 were a country, there is no question we would be bombing the hell out of them, spare no expense.  And yet, we quickly backed away from this wartime footing which is usually the way we do things in the USA.  Everything worth doing has to be a war.  War on Poverty.  War on Drugs.  War on Terror.  War on Cancer. Why no War on COVID-19?

War allows the freeing up of resources.  Nobody complains about debt or the inconveniences.  War also means sacrifice.  Is this the problem?  Are our leaders unable to ask Americans to sacrifice, even when their own lives and the lives of their loved ones are at risk?  What am I missing here?

We have a small pond out back. Used to have a nice koi until a raccoon got him.  Replaced Mr Koi with a few goldfish and some minnows.  By now we are down to one goldfish and a couple of minnows.  I feed them most every day, and noticed I was running low on food.  Usually I would go to the local pet store, since a small container lasts maybe a year, but with COVID-19 I decided to order it on-line.  Amazon had a minimum order of two. Ok, this is light stuff.  I ordered two.  Turns out I should have looked closer.  While the containers look identical, the ones I ordered are 3x – 4x the size of the one I have.  Now I have maybe a decades worth of goldfish food. Could be worse.  I know someone who thought they were ordering ten bananas on-line and was surprised to find ten *bunches* delivered.