A few years ago we had some pool furniture that had some mesh covering that gave out.  I liked the aluminum frames and saved them hoping to do something with them.  I came up with a plan and used some PVC pipe, zip ties and pool noodles to make some really comfortable chairs.

Unfortunately, the UV from the Texas sun destroyed the pool noodles in just a few months.  We bought some cushions and threw them over the PVC pipe which worked out ok, and still works for two of the three chairs.

One of the three had a cushion that also gave out.  Thought I might give the noodle chair another go.  All I would have to do is cut the noodles and put them back on the pipes.  Took about an hour, but it was 106F today.  Went with black and white.  Probably going to get some sort of UV cover the make this one last. 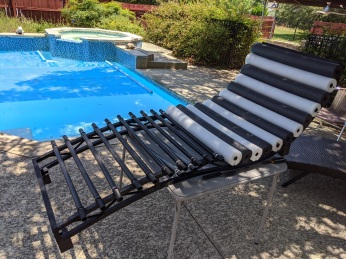 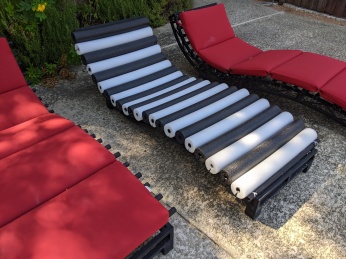 Short of our President I’m not sure I have seen worse leadership, with worse repercussions, than our current Texas Governor.  This is what happens when you have a weak, “business friendly” government.  Business gets it way, at the expense of, well, just about everyone and everything.  Usually the costs in both money and lives are harder to see (I’m thinking of you, Texas oil industry) but this time the price of our Business Friendly government is on display for all to see.  BTW, this article is very sympathetic, at times, to the difficult plight of Gov Abbott.  I’m have no such sympathy.  From the Texas Tribune.

The coronavirus pandemic has proved a leadership test like no other for the second-term governor. He holds nearly all power over the state’s response as it careens toward crisis.